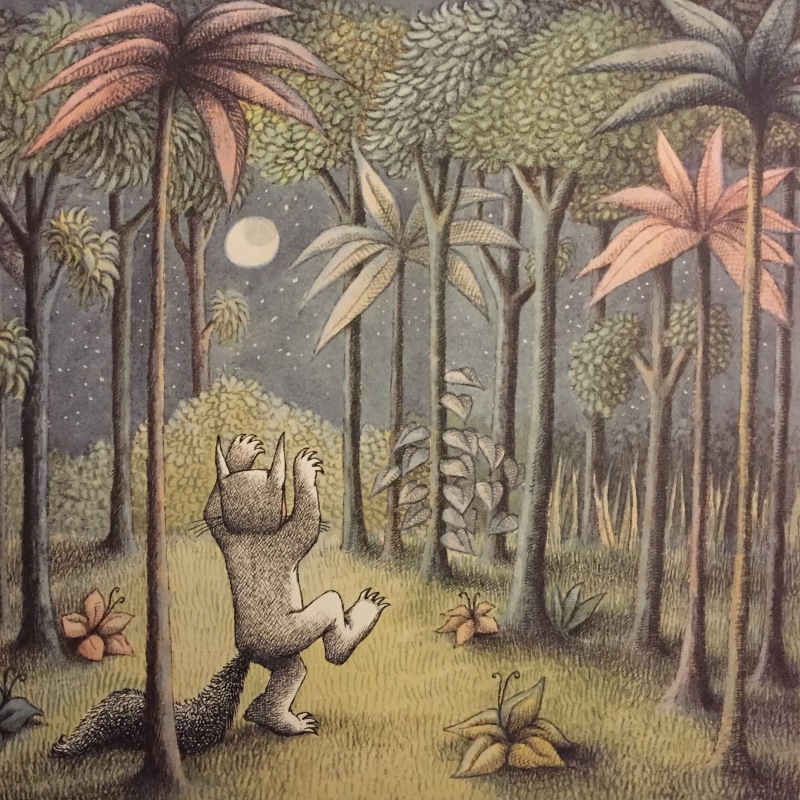 Wild things. They put on their wild thing suits and get all stirred up and wreak wild thing havoc and are sent to their rooms without their supper, rooms by which, however, naturally, of course, they cannot be contained because they’re wild things, after all, and so they drift off to a wild thing wilderness—or that place drifts onto them, over them, around them, like a wild thing fog, strange, mysterious, and enchanting.

And then they’re sailing, sailing on the open seas for days, weeks, months, over a year in their private wild thing boats, sailing to—although they don’t yet know it—a land of their own full of wild things just like them and even wilder. But they tame the wilder wild things with their wild thing magic, proving that they’re the wildest things of all.

And so, crowned rulers of the wild things, they order the wild rumpus to begin and it carries on and on unbridled till dawn when the wild thing kings, tired of rumpusing, finally tired, say STOP! and send all the wild things off to bed without their supper.

And in the early dawn while all the other wild things sleep off the wild effects of the wild rumpus, sleeping on the ground, against trees, piled on each other, the wild thing kings realize how lonely they are, realize they want only to be where they’re loved most, so they relinquish their thrones, against the pleas and terrible calls of the other wild things, and they sail home across the world to their rooms and find their supper waiting, still hot.

That’s one, the real one, here’s another.

Big wild things put on their big wild thing suits and get themselves all stirred up, causing a big wild rumpus and before they even know what’s what they’re all by themselves with no supper, stuck in a not so big room of their very, very own, alone.

And they pace around and up and down and look at the shadowed and cobwebbed corners and the same four walls with the same ugly wallpaper that’s yellowed and peeling along the same seams and the same bare floor with the same scuff marks and the wear marks and finally they lean on the sill and look out the window at the night sky. It’s so close, they think. And they wish and wonder and imagine themselves somewhere, elsewhere, anywhere but herewhere, of course, because that’s what they do best. But it’s really not so close at all and they know.

So they turn away from the window, tired but not sleepy, and they go to their beds and sit. They stop all the pacing and looking and wishing and wondering and turn out their lights and lay back and give in, drifting off, sailing away for days, weeks, months, over a year on the open sleep-self seas, not knowing quite where they’re headed, only glad to be sailing, eyes peeled for land all the while, adventuring and nonetheless unable to stop wondering what home might look and sound and smell and seem like, maybe with fields and meadows and forests and springs and rivers and ravines and hills and mountains and monsters and spirits, maybe someplace vast and wild and new, completely untamed, open and endless, a whole cosmos on needlepoint if they could cup their hands and hold it. Someplace where the wild rumpus can go on without end or care, without walls and floors and windows and silence.

And then they arrive, they finally make it to a somewhere that is not just anywhere but an elsewhere, reaching a place where they find, of all things, another wild thing, one just like them but different, a lot like them and not like them, all lovely terrible teeth and eyes and claws and roars and the food is warm and they are loved and adored and given crowns and scepters with which to reign and rule and play and the wildest of the wild rumpuses does then commence, carrying on through the night, the morning, the day, the evening, the night again and again.

But one day, rumpused out and fearful of a budding disenchantment rising up somewhere behind their hearts, taking root, making them afraid it’s all gone for good and good as gone and, not knowing what else to do, they leave this wild land just as suddenly as they arrived and the wild thing that is just like them but not like them reaches and roars and fights and pleads—we love you, it says, please don’t go, we love you, we’re so happy we could die—but the wild things will not be persuaded. They know, they know, they say, but the gloom has them, it is coming, growing and so their minds have made themselves up, tied them up, done them up with utmost uncertainty, their only best defense.

All because they emerged from the wildest of wild rumpuses feeling sad and lost and alone somehow, seeing the darkness rolling in over treetops and hilltops, wondering what home had become, incredulous almost, gripped by the same old perplexity, while the wild things that are just like them but not like them slept their wild thing hearts out, content and exhausted and dreaming of more.

And so the big wild things believe they must go before the great darkness hits and catches them and destroys them, chasing them down like a black-eyed dog, believing they have no choice, wondering, even, if leaving is part of their purpose. And with that they get back in their lonely boat and drift for days, weeks, months, over a year and…

Then they wake up.

No one is there, as before, and no warm food. They are in their rooms again, their rooms that are more like cells, they think, lying there in the dark, with a faint moonbeam through the window making strange shadows, almost making sounds. And they pull the covers up close to their not-so-wild chins and hope the solace of sleep will again take them away, soon, wondering why their dreams end this way, here, starting over but bleeding right through.

I write things about stuff, and sometimes stuff about things. Depends on the day.