I write under the name “Mischa” but that’s not my real name. Well, not anymore, usually, I mean it’s real, and it really was ceremoniously bestowed upon me by the power vested in my parents and the state of Virginia, but I tend to go by Mike or Michael—or Fernandoquan inside inner secret insider circles—because Mike or Michael are generally easier for everyone else to say/pronounce/accept and it makes for a nice 50-50 personality split, Mischa boy and Mike/chael man. Sometimes the split’s more like 80-20 or 20-80, depending on the lean of polarity and fat content. So now you know: Mischa as a child and for clandestine writing activities, but it’s Fernandoquan to real friends. For everyone else, Mike/chael will do.

I have a saying: when life gives you lemons, make apple pie.

I don’t know what that means but it sounds deliciouser than lemon pie.

I sometimes carry a baseball bat around my apartment with me when I’m working. It’s my thinking bat. It was my dad’s, and I’ve had it since I was a Mischa. The only drawback to this is the fact that Tom Cruise’s character in “A Few Good Men” had a similar habit, and he’s crazy. If I join the Church of Scientology in a few years, you’ll know where it started.

I went to school a lot, a lot enough to learn that a lot should never be written alot, and I mean that in both senses in which that grammatically ambiguous sentence might be understood. Other than that, I learned that student loans must be repaid, and that this repayment involves things called “principal” and “interest” and that each payment covers about 0.0000007% of the principal which in terms of chronos and logics means I’ll be debt free when I die. Not that I’ll be debt free by the time I die, but, rather, that death is a necessary condition for the alleviation of my fiscal responsibility to the United States government. But that’s ok, because I’ve got diplomas in cardboard tubes in my closet in case the apocalypse we’ve been hearing so much about since the beginning of bad ideas finally comes along and wipes out all our stuff and we have to revert to papyrus contained in cardboard tubes. Then I’ll be at the top of the food chain. And still making loan payments.

I’m not big on the wearing of shirts, but I typically do in public unless I’m running outside in summertime heat in because I like to sweat a lot and scare people.

I clench my jaw so hard at night that I’ve worn my teeth flat in some places, which I know because the dentist took pictures and showed me and I thought they looked like woolly mammoth molars after years of masticating large quantities of foliage or whatever the hell they ate. Probably cavemen. Woolly mammoth teeth but I’ve never had a cavity, which I take as an illustration of the fact that most of my damage is my own damage done.

I drink coffee made from beans hand-picked by a Guatemalan boy named Pedro who each morning rushes up the hill behind his quaintly dilapidated tiny wood-framed adobe house to pluck said beans and toss them into his red baseball cap, as many as the cap will hold, so his parents can package and ship them directly to me, a capful at a time. Every year I send him a letter of heartfelt thanks and a single Swiss franc, advising him to refrain from spending it all at once and to be good to his parents. This makes me a good person.

I once worked a job with a shift beginning at 3 a.m., otherwise known as stupid o’clock, and it was as bad as it sounds. It was in a hardware/home improvement/construction supplies/lumber depot type of store and I think I made it for about a month, which I considered to be an accomplishment, although no awards or honors were bestowed. My employers made me drive the forklifts and cranes and all the other machinery because I was the only one of my esteemed colleagues who could do so without running into shit and damaging merchandise and/or killing people.

I now have a different job but there are no forklifts or cranes to drive.

I have a healthy distrust for positive thinking, am acutely aware of the lurking danger of self parody, often can’t tell what’s real and don’t care to, enjoy commiserating with both strangers and friends alike over a mutual sense of disenchantment or dreams of making it better, and I’m prone to melancholy but not overdoses (I think) and I used to dismiss Foucault and most poetry because I didn’t understand them and who were they to make me look stupid.

I make what you might call “poor life choices,” but writing is not one of them, as it is not a choice. I’m a messy writer, with words strewn about my apartment, on the floor, couch, kitchen counter, paragraphs piled in corners, ideas drifting around like noxious gasses and I dream of being the literary version of Damien Rice playing Spanish guitar to the lovely ladies and gentle gents.

I sometimes think my shit is ok, that it’s ok shit and not shit shit. Then sometimes I think I might be on to something new and big and different and profound, something avant-garde, even, daresay I delusioned shy uncertain narcissus with all the hair twirling and eyelash batting. And sometimes I think people don’t/won’t care anyway and that covers one and two and so be it, that’s ok, it’s ok if it’s ok shit.

I read a lot of book reviews and random articles online and the philosophy of art really gets my goat or takes my cake or ices my cookies or something confectionary like that.

I love breakfast, and sometimes that means confections, though it has yet to mean lemon pie. I also love serendipity and chance and the little torrents of synchronicity that do at times precipitate and rain beautiful, clever, strange sweet things/people down on a life so it can grow. And I love Chekhov, Lispector, Dostoevsky, Camus, Proust, Faulkner (most times), Steinbeck (pretty much all the time), Cioran, Benjamin, Kundera, Szymborska, Judt, Ginzburg, Heller (once), Plath, Rimbaud, Miłosz, Bellow (essays more than fiction), Vonnegut (as a human being), and a couple stories by Bichsel and a thin little volume by Fleishmann and Don Quixote even though he’s a book and not an author and some stuff by some lovely people scattered around the globe and I miss Jenny Diski.

I also love impressionism, platonically and romantically, and paintings and photography have a way of quieting my soul or whatever it is inside us that blends thought and feeling into a transmutated substance that then lives and dies according to what the world feeds it.

I have a little sister, finally, and today is her birthday and she’s rapidly becoming unlittle and that’s what this is really about, it’s about me, for her, to her, today, in case she wants to get to know her (much) bigger brother a little better and reads it sometime, today, anytime. Today is also the day of independence, patriotism, Murica, stars and spangles and banners and explosions and beer and hot dogs and lemon pie. And freedom from taxation without representation. And terrible flag-based attire. And liberty and justice. Sort of, sometimes, not always for everyone, it just depends. And of Uncle Sam and my dad—our dad—to whom I earlier in the day sent this photograph of a newspaper cli 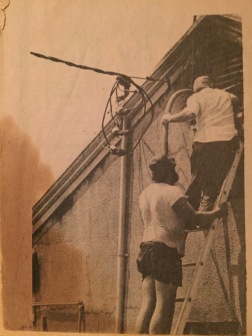 pping circa 1843 of a story about a fire he helped put out by simply being very large. Sent it to him and his response, texted, was: “Famous American First Responder Saves Citizen” and “What guns!” Sent my sister the same photo and said I think this means he’s famous and she said “of course he is” and I said I love you lots and can’t wait to see you again and then I went and ate burgers and watermelon made with tofu and pomegranate because I wasn’t dressed Americanly enough to be permitted to purchase patriotism when I went to the store. So it goes, Vonnegut said, and so do we. Happy birthday, kiddo.

4 thoughts on “some stuff beginning with i”

I write things about stuff, and sometimes stuff about things. Depends on the day.